City of a million temples 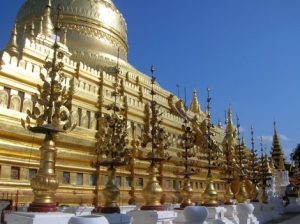 This amazing place, many did not even know about its existence. Bagan or Pagan is an ancient city in Myanmar (Burma) with a fascinating history, this is where the writing, literature, architecture, visual arts of modern Myanmar originated. With full confidence, Bagan can be called the city of a million temples.
The emergence of the Pagan State is an amazing historical phenomenon. A powerful state developed, by historical standards, almost instantly, having conquered the whole world with magnificent works of art, the flourishing of religion and a perfect administrative system. Scientists can not name a specific reason for such rapid development, because the documentary evidence is not preserved.
The city originally bore the name of Arimaddan (the City, which plunges the enemies), it was also called Copper or Scorched Earth.
What did not see this ancient city, and palace coups, the struggle for power, the overthrow of traitors from the throne, the warriors for the “true faith” – Buddhism, conquest, “demographic” coups, uprisings, peace, tranquility and decline.
The ruins of the ancient city cover an area of ​​about 42km. This is the richest site in Southeast Asia for archaeological excavations, focused on a small space. 2230 monuments of architecture remained from the great city, about 1000 temples were destroyed, and 600 were washed away by the course of the Irrawaddy River during the summer flood. Given the number of monuments of historical value, the city rightfully bears the name of a Million Temples.
The ancient city is one of the richest archaeological sites in Southeast Asia. There are 2,230 monuments that are still preserved. Approximately 1,000 monuments are in ruins, and initially there were approximately 4,500. The 600 temples of Bagan were washed away by the Irrawaddy River during the summer floods.
To visit such an exciting place, it is not necessary to choose a special season, the city is located in the upper part of Myanmar, because there is no rainy season, as in the rest of the country. Many tourists annually come every year to admire the magnificence of the ancient city of Bagan.
Unfortunately, the government of the country does not give due attention to the monument of the ancient world. Bagan was included in the UNESCO World Heritage List, but was later excluded. Again, all due to the fault of local authorities, they restore the ancient temples, not adhering to the original architectural styles, use modern materials that in no way coincide with the original projects. The military government of Myanmar went even further by installing a 200-foot fire tower near Bagan, as well as building a highway and a large golf course here.