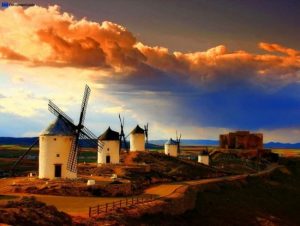 Most modern tourists turned their attention to intellectual and cultural recreation. Which can fully provide enterprising tour operators. Ideas for the development of new routes can be gleaned from the most famous literary works or modern films. Moreover, if you do not have your own vehicle, many tourist routes are even more interesting to get on the tourist bus.
We present to your attention the top 10 most interesting routes where events of world famous novels and films have developed.
10th place: In the south of France, in the town of Lupiyak, an official project was launched based on the novel by Alexander Dumas. Equestrian route will allow you to feel like a real Gascon, as well as learn more about the historical basis of the novel and the prototype of the main character – Charles de Batz Castelmore.
9th place: True admirers of the novel Miguel de Cervantes will remain delighted with the autonomous region of Castilla-La Mancha. This is where the crafty hidalgo Don Quixote begins its route. Modern tourists can comfortably visit El Toboso, search for meetings with the very Dulcinea. The gaze will open up not only the literary, but also the historical places of Spain: castles and fortresses, the sanctuary of the Most Holy Theotokos de Cortes, the remains of the Roman road.
8th place: “There is no sadder story in the world …”, which was played out under the balcony of the beautiful Juliet Capulet. In Verona, you can personally see the marble balcony, which was recreated in the 1930s.
7th place: Bran Castle – the favorite place of Count Dracula opened its doors to tourists. You can feel the chilling horror of legends and traditions associated with the name of Vlad Tepes, on the territory of modern Romania.
6th place: Well-known sights of Europe: the Louvre, Bank of Zurich, the Church of Saint-Sulpice in Paris, Westminster Abbey in London, etc. became even more attractive after the publication of Dan Brown’s Da Vinci Code. Hordes of tourists seek to unravel the mystical secrets with the heroes of this novel.
5th place: Another tourist guidebook becomes the novel “Angels and Demons” already known to us Dan Brown. He leads tourists to the most famous sights of Rome, which can be found on a sightseeing tour of the city. But taking a novel in your hands, you will lift the curtain of medieval mystery for yourself.
4th place: A small cozy cafe in Montmartre, where the film was shot by director Jean Pierre Gene, does not accommodate all tourists. Yes, and it is called “Two Mills.” Polite staff and cozy atmosphere will leave a pleasant impression. At the same time, prices correspond to increased tourist interest and location in the most visited area.
3rd place: In the 2-hour drive from London there is a recognizable place by all – the Gloucester Cathedral. Famous among tourists, he became after the release of the picture “Harry Potter”. It was he who at the time of the shooting turned into the Hagwarts school and served as scenery for many scenes.
2nd place: James Bond Island, located in Phang Nga Bay, annually attracts thousands of tourists. Spectacular photos on the memory in the style of the film “Man with a Golden Gun” will not leave anyone indifferent.
1st place: Dinner at Butlers Wharf – the favorite place of the heroes of the film “Bridget Jones’s Diary”, an excursion to the Royal Maritime College in Greenwich – you can try all this by visiting East London.
Unique tourist routes (10 photos)
The book is just the beginning. Therefore, you should not stay up at home, follow your favorite characters and authors, and they will reveal many more new and interesting things to you.