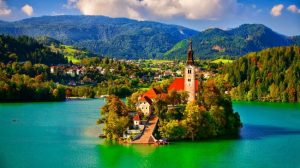 Slovenia is a beautiful European country, popular among both tourists and immigrants who are looking for a better life. Surpassing all other Eastern European countries in terms of living standards, Slovenia is a great option for life. In this country, beautiful nature, excellent ecology, and the population happiness index and life expectancy are very high. Here are some interesting facts about this country.
The main attraction of Maribor is the Old Vine House. Next to it grows the most ancient vine on the planet. Her age is over 400 years. Not so long ago this record was listed in the Guinness Book of Records! This vine still produces about 55 kilograms of red grapes annually. Then it is made from an elite and very expensive wine!
It is very convenient to travel anywhere in the country by train, as the Slovenian railway network covers almost the entire territory.
In Slovenia, was discovered the most ancient musical instrument in the world – the bone pipe.
Slovenia is the only state in the world whose name contains the word “love”: Slovenia.
The nature of Slovenia is very diverse. In the north of the country, in the foothills, it is cool, and in the south at this time subtropical heat may reign. With all this, Slovenia is a very small state.
The state language is Slovene, vaguely reminiscent of Old Slavic. Many people speak English, German (in the Alps) and Italian (on the coast). Slovenian is considered one of the most archaic languages ​​in the world. It is the only official language of the EU and one of the few in the world in which, along with the plural and singular, the dual number is also preserved. This language also has the largest number of dialects (48) in terms of the number of native speakers.
On the territory of Slovenia there are more than two hundred and sixty waterfalls.
The only national park in the country, Triglav – the oldest in all of Europe.
Slovenia is bordered by Austria, Italy, Hungary and Croatia.
The population of Slovenia is 2 million people. The capital of Slovenia is Ljubljana, and it has less than two hundred seventy thousand people, that is, approximately fifty times less than in Moscow. The national currency of Slovenia is the euro.
There are no traffic jams in the country. The road by car from Ljubljana to the sea will take about an hour.
The working day usually starts early, at seven or eight in the morning, but ends at three or four in the afternoon.
One can apply for permanent residence in Slovenia after five years of legal residence in the country. But commercial real estate in Slovenia can be acquired or you can look after it through special sources. Huge selection of real estate, convenient communication with the operator.
Want to live in a prison cell? It is not joke. Every whim for your money. You can pay for accommodation in the prison cell of the hostel “Celica” in the capital of Slovenia – Ljubljana.
The oldest hotel in Slovenia is located on the island of Bled, and is called the “Hotel Golf” (1937). In 1976, this hotel became the host of the world’s first golf tournament.
The most visited cave in Europe – Postojna Cave, located in Slovenia. It has a network of 20 kilometers of walkways, chambers and caves.
Slovenian-born Benka Pulko was listed in the Guinness Book of Records as a woman who covered the greatest distance on a motorcycle. She traveled around the world with a length of 180 thousand kilometers in 2000 days.
The highest industrial pipe in Europe is in Trbovlje – 362 meters. It was built in 1977 on the territory of a thermal power station.
The horse farm in Lipica is famous for the fact that since 1580 it has grown a special noble breed of horses – the Lipizians. These horses are supplied to the royal courts of Europe.
In 2004, the Slovenian traveler Mateusz Lenarcic became the first person in the world to fly around the globe on an ultra-light aircraft (284 kg) without additional air support and a second pilot. On the same day, he set a world speed record for ultra-light aircraft in the category up to 500 kilograms. And on April 20, 2012, he returned from the second single Around the World and set new records.