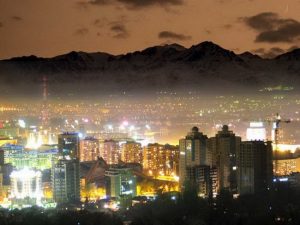 In the summer of Kazakhstan, the city of Almaty literally immersed in the greenery of gardens, parks, squares. Every year at the end of May, more than 120 fountains turn on the city’s streets, along with the Bolshaya Almatinka and Malaya Almatinka rivers, their sleeves, canals, and reservoirs forming an extensive water network. Surrounded by the natural beauty of the northern Tien Shan mountains, filled with man-made sights, the city has always been an attractive tourist destination.
The train is the most popular way to get to the former capital of Kazakhstan. The railway connects Almaty with many Russian regions and neighboring Asian countries. The modern station “Almaty-1”, located in the northern part of the city on Stancionnaya Street, is a transit station – it passes trains from Siberia to Central Asia. Station “Almaty-2” is located closer to the city center (on Abylay Khan Avenue) and is intended for passengers coming to this beautiful garden city.
Both visitors and locals love to visit the Kok-Tube mountain, located very close to the city. You can get to the top of the mountain by bus or (spending only six minutes) by cable car, starting at the Palace of the Republic on Dostyk Avenue. From the observation deck of Kok-Tyube, magnificent panoramas of the snow-capped peaks of the Alatau and Almaty ridges open up. There is a television tower, an amusement park in which the Beatles monument is set up.
In the Medeu district of the city, on the area of ​​18 hectares, a park named after 28 Panfilovs is located, forming a unique ensemble in a complex with neighboring buildings. In the center of the park stands the functioning Ascension Cathedral, built at the very beginning of the last century, entirely of wooden details. In front of the eastern entrance to the park there is the building of the Officers’ House – the most interesting architectural landmark of the city. Near the park, in the building, which is a monument of history and wooden architecture, a museum of Kazakh musical instruments has been opened, which has the richest collections. In the park there is a memorial of Glory with the Eternal Flame, monuments to fallen soldiers- “Afghans”, heroes of wars.
Those who are lucky enough to be in the city in the winter will be interested in visiting the Medeo high-mountainous complex known to the whole world – a kind of “record factory”. To fill the local rink is used pure mountain water. Just above the “Medeo” is the ski resort “Chimbulak”, equipped in the same tract. Attracted by favorable conditions, a lot of ordinary tourists, skiers, climbers, freestyle fans flock to this area.