Rest in the UAE: an overview of resorts and attractions 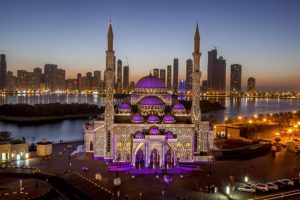 The United Arab Emirates is located on the eastern part of the Arabian coast. Here you can relax all year round, although the most popular is the period from October to May. It was at this time in the UAE that the most pleasant temperature (at the level of +25 – +30 degrees Celsius), in the summer, it can rise to +50 degrees Celsius. But this does not mean that in the summer you should not come here. During this period, prices for tours are much lower, besides, there are air conditioners installed in all rooms (even at bus stops), so the heat will not be strongly felt. The main resorts that are now actively developing in the UAE are Abu Dhabi, Dubai, Sharjah and Fujairah.
Abu Dhabi is the capital of the United Arab Emirates. People come here for shopping and excursions, beach rest fades into the background. In Abu Dhabi, you can walk through the park, located on the waterfront, in which there are 90 fountains. It will be interesting to see the palaces of Al-Husn and Al-Jafar, mosques are almost at every turn, the most famous is Sheikh Zayed. As is known, the United Arab Emirates was a poor state until oil was found on their territory. The history of the city can be viewed at the oil exhibition. At night, there is also something to do, in Abu Dhabi, there are many bars and nightclubs.
Dubai is the most popular emirate among tourists. There is everything for a great holiday: the sea, sandy beaches, closed mountain trails, visit the tallest building in the world – the Burj Khalifa Tower (828 m). Next to the tower is a huge shopping center, which presents products of all brands, has its own aquarium, and at the entrance is the world’s highest dancing fountain. The emirate is also known for the most expensive hotel in the world “Sail”. Dubai, like other emirates, is rich in many mosques, markets, bazaars, etc.
Sharjah is considered the cultural capital of the UAE. This emirate is the most stringent, here follow the rules of the Muslim religion: dry law in Sharjah, in addition, it is not pleasant to walk in open clothes (girls preferably cover their shoulders and knees). This resort is located on the coast of the Persian Sea and the Gulf of Oman, there are both private and public beaches. There are many parks and gardens in Sharjah, a 100-meter fountain is located in Al Modjaz Park, you can look down on the Ferris wheel on the entire emirate. The main attractions are the King Faisal Mosque, watchtowers, the monument to the Holy Quran, numerous museums and galleries.
The emirate of Fujairah until 1952 was part of Sharjah, today it became a separate resort. It is located on the coast of the Indian Ocean. Here you can relax on the spacious beaches, snorkeling, diving. In Fujairah, it will be interesting to see Ain Al-Madhab gardens, hot springs, bullfights, Museum of ancient settlements with finds, numerous mosques, etc.
The United Arab Emirates is an interesting country, where until the 50s of the last century there was a desert and poverty flourished. Today, this state has become a resort, striking in its beauty and scale: the tallest building in the world, the tallest fountain, the most expensive hotel – all this can be seen here.