5 of the strangest state borders 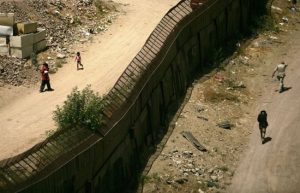 Where there are boundaries, there will always be dissatisfied. Yes, and the boundaries are always set painfully – through wars, painful negotiations, political fraud and intrigue. It is not surprising that some crazy stories are associated with borders.
1. Americans who were on the other side of the Mexican border
A fence between Texas and Mexico was erected under President Bush, Jr., in 2008. The goal is obvious: to reduce the number of illegal migrants and block the traffic on oxygen. For the American farmers living on the very frontier, this innovation should have been a great relief (they really were not thrilled by the constantly traffickers plying here and there and the periodic exchange of fire between drug cartels) if not for one small circumstance: these Americans were the result of another side of the fence. That is – in Mexico.
How this happened is unknown, but the fence was built a mile from the real border, so in some places it passed through private territories of innocent landowners. You can imagine the horror of a man who suddenly sees how on his native land, inherited from his ancestors, suddenly grows a tall fence with a terrible inscription “DO NOT APPROACH !!!”. Now these Americans are forced to cross the border every time they need to get to work or sit in a bar with friends.
One farmer complains that he has to go through border control whenever he goes from his own field to his own barn.
The territory of one of Texas universities was cut into two parts. So students also have to run from lecture to lecture across the border.
2. Indian Town in Bangladesh in India in Bangladesh
The enclave, as you probably already know, is a piece of one country that is inside another, such a peculiar islet. In rare cases, another island is formed inside the enclave, which is called a second-order enclave. That is, the first enclave will resemble a donut, and the second order enclave will resemble a donut hole. And if you need to get to that part of your country, which is in the middle of the “donut”, you need to cross two borders.
Now imagine that you live in the Indian district of Dahal Kagrabari. It is surrounded by a bagel of Bangladesh, which, in turn, is surrounded by a bagel of India, and the whole structure is located on the territory of Bangladesh.
If you need to cross the entire configuration through, you will go first to India, then to Bangladesh, then again India, Bangladesh, India, Bangladesh, India, Bangladesh.
In general, on the territory of these two countries, there are 160 enclaves, but such a multi-part, fortunately, only one. It was the result of the signing of a peace treaty after a long history of wars. In order not to conduct lengthy negotiations and altercations, the parties simply froze the borders that were formed at the time of signing, taking into account the smallest patches of land that they managed to snatch from each other.
From the side it is quite funny, but local residents are not at all laughing. It is very difficult for each of them to leave their tiny bagel, in which they are stuck, like punished. Citizens of India, for example, in order to go to relatives in “big” India, need a passport, without which they will not be allowed into Bangladesh. And passports are issued only in “big” India. That is, in order to get a passport for departure, they again need to somehow cross the territory of Bangladesh. Twice. So it turns a vicious circle.
India is experiencing the exact same torments to provide these citizens with the most necessary things. However, all the torments and limited. Therefore, the district Dahala Kagrabari still lives without electricity and, in fact, stuck in the Stone Age. Only in well guarded.
3. Table at the Korean border
North Korea is a strange country. This is manifested in everything. And the border is no exception.
The border between North and South Korea is called a “demilitarized zone”. Nearly two million military men are concentrated along it from both sides. And since the war in Korea is so formal and not over, no one is allowed to cross this border. Never. Not under any pretext. Even presidents.
It is not difficult to guess that in a situation where no one is
cannot invite for a cup of tea with cookies, it is extremely difficult to conduct any negotiations whatsoever. And the Koreans came up with a rather strange way out.
They took, and built a conference room right on the border. Moreover, such that one half of the negotiating table stood on the territory of North Korea, and the other half of South. That is, the parties can negotiate without leaving the territories of their countries. This conference room is always full of military people who keep an eye on each other day or night. Even when no negotiations are conducted.
I wonder if the presidents can reach out to each other and shake hands? And what if one of them asks the other to transfer the sugar bowl? Or should everyone come with his?