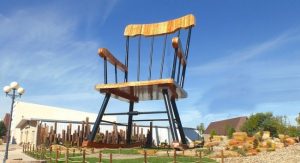 Located on an area of ​​just over 3 kilometers with a population of less than 3,000, Casey, Illinois is probably considered one of the smallest in the United States, but at the same time it is home to some of the world’s largest objects. Among them: a musical pendant, a rocking chair, knitting needles and a hook, a mailbox, a pitchfork, a golf peg, a pair of wooden shoes, coins, a birdcage, a ruler, a pencil, a corn cob, carnegia, and much more. Eight of these items hit the Guinness Book of Records. Behind all these sights there is only one person – local businessman Jim Bolin.
Bolin is the vice president of Bolin Enterprises Inc., which started from a small car paint shop right in the family garage. Today, Bolin has 240 employees, and the company maintains oil and gas pipelines almost all over the country. But not all Casey businesses shared the success of Bolin. Year after year, the entrepreneur observed how shops and firms were closed in the town — a shoe factory, a production workshop and a tool shop, a household goods store, a feed shop. When the economic downturn hit the late 2000s, even Bolin felt its negative impact. It was then that he decided that it was time to develop and promote the tourist business in the town in order to support the local economy.
Working in the service of pipelines, Bolin had access to a huge number of unused structures, which he decided to master for styling a giant rocking chair. The project took 2 years to complete. When in 2011 the giant armchair was completed, it reached 16.5 meters in height. Since then, ideas have fallen.
Bolin Enterprises already had a paint shop and several talented craftsmen. In addition, they had access to materials such as old telephone poles (which they used for the rocking chair) and oil tanks (which became the basis of a giant mailbox and the bottom for the bird cage). Almost all materials used for the construction of giant structures were already used up and written off for repeated use.
One of the conditions in order to get into the Guinness Book of Records, is that the objects were functional, could serve for something. So Bolin made giant knitting needles and instructed his cousin, Jeanette Huisinga, who has her own yarn shop, to climb onto the world’s largest rocking chair and tie the world’s largest knitting needles. the world of scarf. Now images of the world’s largest knitting needles and hook adorn her shop.
Bolin’s big objects work wonders for the local economy. For example, a candy store, which is under the same roof as the world’s largest shoes itself, makes hundreds of sales a day, thanks to the tourists who come to look at giant shoes. Visitors even throw money at random into these shoes. The collected funds are donated to the District dining room for the poor. Similarly, the world’s largest mailbox contributes to the sale of stamped cards, which tourists sign and throw here. Hundreds of postcards per day are manually stamped by the office department and pasted over with special postage stamps dedicated specifically to the record box.
Bolin plans many more large items for the town. In the next few months or years, a giant hammer, a giant rocking horse, large baseball bats, a giant golf club and the world’s largest swing, roomy enough for an entire family, will appear in Casey.