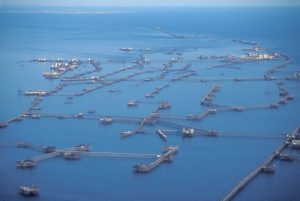 In 1950, Soviet engineers began building a huge city in the Caspian Sea off the coast of Azerbaijan. It was a network of oil platforms, interconnected by hundreds of kilometers of roads. On these islands was built housing for 5,000 workers, with a cinema, parks, sports complexes and other institutions. Gradually, oil reserves have been depleted, and now this place is a half-destroyed nostalgia for the old engineering thought of the Soviet man.
In 1999, part of the James Bond film “And the Whole World Is Not Enough” was filmed on these platforms. But back to the story. This region of Azerbaijan has been known for its rich oil resources since ancient times. “Liquid fire”, for which Constantinople was besieged by the Arabs in the seventh century, consisted mainly of oil, which was collected directly on the shores of the Black and Caspian Sea. The Persians called this area “the Land of Lights”, where the priests illuminated their temples with oil from natural sources, this oil was oil.
Oil production on an industrial scale was not engaged here until 1870, it was at this time that Russia conquered this land. By that time, Baku was the equivalent of Nice, where rich people from all over Europe lived and rested.
In 1941, Azerbaijan, at that time it was part of the Soviet Union, already delivered 175 million barrels of crude oil per year — this accounted for 75 percent of all oil production in the country. That is why German troops during the Second World War, so sought here.
After the war, Soviet engineers arrived on a coastal island, which the sailors called the “Black Rock”. They built a barn on a tiny island and conducted test drilling. On the night of November 7, 1949, they discovered high-quality oil at a depth of 1,100 meters below the seabed and shortly thereafter, the first offshore oil production platform in the world was built at this place. The platform was primitive, compared with modern mastodons, because it consisted mainly of wood.
After all spun. Huge deposits of oil were discovered, more than 200 platforms were built, more than 300 kilometers of roads and bridges connecting the platforms on which the tankers cruised. Thanks to this field, massive construction of oil tankers began in the world. High-rise buildings were built for 5,000 workers, right at sea. Workers lived for weeks at the mine. The journey home to the mainland could take from six to twelve hours. The island had its own beverage factory, a football field, a library, a bakery, a laundry room, a 300-seat cinema, a sauna, a garden, a vegetable garden, and even parks for which the soil was brought from the mainland.
This was Stalinist utopia for the working class. Utopia existed and was a paradise for the oil industry for about ten years, until the quality of oil began to fall and the derrick closed.
Now most of the roads have collapsed and represent a great danger to shipping. But I want to surprise you, there are still people who work and live there. They earn only $ 130 a month, which is several times less than the oil industry worker receives on the mainland, but there are such people.
There were plans to re-equip these places and even thought about turning it into a tropical luxury resort, but nothing came of it. Today, this field accounts for only a small part of the oil produced in Azerbaijan. According to experts, oil fields can produce oil for about 20 years. But the infrastructure remains a maximum of ten years. Without proper repair, this whole utopia will be under the waters of the Caspian Sea in about five years.