Beijing is a unique city 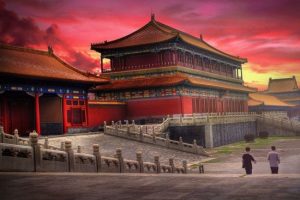 Officially, 7309 oldest historical monuments are registered in the northern capital. To explore all its attractions is not enough for a month. Informative excursions to the most interesting places will help to feel the spirit of the city, to learn more about the history and culture of the Chinese.
Tiananmen Square
Familiarity with Beijing guides advise you to start with Tiananmen. There are dozens of monuments that will acquaint tourists with the culture and past of the local people. Every day, spectators gather here to see the fascinating ritual of raising the national flag of China. This tradition has been for many years, but it does not cease to cause awe in the hearts of the inhabitants of Beijing.
The area has a huge size. Here the most important events take place, the guests of the city constantly walk, fly kites and take pictures against the background of architectural monuments. The Museum of the Revolution, the Opera House, the National Assembly building and the Historical Museum are located on Tananmen Square. Here you can spend the whole day admiring the places of interest.
In the watch tower of medieval times Deshengmen is a paradise for numismatists – the Museum of ancient coins. The height of the key cultural and historical relic is 32 meters, it is one of two towers that guarded the entrance to the inner city during the Ming Dynasty.
The museum regularly hosts thematic exhibitions. The main exhibition consists of about a thousand coins and bills, both preserved from antiquity and modern samples of the currency of China.
One of the most remarkable skyscrapers in China is the building of China Central Television. Its construction lasted about 5 years. As a result, the construction was erected in 54 floors, the total height of which was 234 meters. Locals affectionately call the building “pants.” It is attractive not only for the originality of the building, but also from an engineering point of view. The design is a whole, therefore, very reliable, which is especially important in an area with high seismic activity.
Many tourists come to Beijing specifically to visit the largest palace complex in the world. According to ancient astronomers, the residence of the Chinese emperors was built right in the center of the globe.
To get to the city, you need to go through 3 gates: Tiananmen, Duanmen, Umen. Previously, ordinary people and foreigners were never allowed to cross the threshold of the dwelling emperor’s dwelling. For this the death penalty was prepared for the violator.
The interior and exterior design of the complex is fully consistent with the philosophy and religious principles of China. All the buildings are elegant and beautiful, on the territory you can see old gazebos, pavilions, gardens and lakes, and the shops offer tourists unique souvenirs that cannot be found in any other shop in the city.