Malé, a city surrounded by water 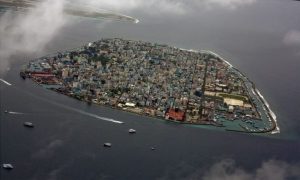 Male is the capital and largest city of the Maldives Republic. It is located on the island of the same name, on the atoll of Kaafu. The population is about 100,000 people. Since ancient times, the royal residence was located here. Male Island is only 2 kilometers long and 1 kilometer wide, completely built up with buildings and roads. In this case, Male remains a clean and tidy city with mosques, markets, a maze of small streets, wrapped in a veil of charm.
The size of the island was doubled by construction. There is everything that is supposed to have an eastern city: mosques, a market, many souvenir shops, small cafes with exotic dishes and more.
There are no tall buildings, and bicycles are much larger than cars. In Male it is almost impossible to get lost, all the streets overlook three large roads. There are many hotels on the island. Each hotel has its own pleasure boat, where you can go on a cruise through the archipelago for several days.
In Malé, you can find cheap hotels and eateries, but nightlife is limited to teahouses and several Western-style restaurants. Indian and Hollywood movies are shown in two cinemas.
Some Malé restaurants are air-conditioned, others offer a more relaxed outdoor setting. The choice of cuisine is quite wide: from the exquisite international menu to local versions of Asian and European dishes. Some restaurants are open in the morning, others from lunch. All restaurants close at 1 am.
Despite the modest size of Male, a taxi in the city can be useful to you, especially if it is raining. The cost of a taxi service ranges from 15-20 Rufys for travel to any point of the city, with an additional charge of 5 Rufi for each piece of baggage (15 Rufi = 1 USD). Taxis can be caught on the street, but in Malia it is customary to call a car by calling one of the many taxi services.
All resorts, hotels, major stores and restaurants have permission to provide currency exchange services and accept currency in many countries. Malé is the country’s shopping center with a considerable choice of stores that meet the needs of 100,000 residents and thousands more buyers arriving from the islands. Small shops on the outskirts of the capital can receive visitors as early as 6-7 am, while on the main streets stores open around 9-10 hours. All shops close at 11 pm, as well as during short 15-minute breaks during prayers.