Scandinavia – the country of mysterious legends 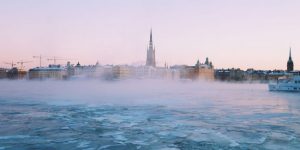 Every time Russian travelers begin to share their impressions of acquaintance with Scandinavia, many completely opposite statements arise. Someone can not help delight and seeks again and again to go on tours to Scandinavia: skiing in Finland, see the Norwegian fjords or stroll through the beautiful northern capitals. And someone comes to utter disappointment and argues that it is not possible to understand these closed cold people “without a pint”, and this does not always help. Although, it would seem, it is easier for us, Russians, to understand the Scandinavian peoples – their northern neighbors, but it was not there. As you know, in order to understand the mentality of the inhabitants of a country, it is necessary to dive deep enough into its culture. In this small article we suggest you to get acquainted with the Scandinavian mythology. Perhaps this will help you to better understand the vicissitudes of the Scandinavian nature and the next time you go to Scandinavia on the ferry and awake to cut the cold waters of the Baltic Sea, you will discover something new about this amazing corner of the planet.
Much is not clear in the Scandinavian myths to foreigners. They seem to be too intricate, contradictory, oversaturated deities, heroes, good and evil spirits, mysterious creatures. Even a very diligent listener and reader can not always understand the events and vicissitudes that occur in the myths of the peoples of Scandinavia.
The tribes that lived in antiquity on the territory of Scandinavia, during the long polar nights, had a lot of time to create legends and traditions. Darkness, cold, raging elements outside the dwelling houses of the inhabitants of the North excited the imagination of ancient storytellers and listeners.
According to Norse mythology, Odin was not at first part of the circle of the heavenly gods. He was a wise leader of heroes, a warrior, a poet, a priest, a healer. Originally, the future supreme god of the Scandinavians lived and performed his exploits on the lands between the Caspian Sea and Black Sea. So says the legend.
But one day his father Bor called Odin to the northern lands:
– Go to the new world, where you will become the ruler of the people and their gods. The civilization of the Zaboreans died. Their heavenly masters were tired and plunged into the white dreams of ice and snow …
“But can I replace them?” – one asked modestly. – Do I have enough strength and knowledge for this?
– Worthy of this goal, the wisdom and power you gain along the way. The road to the northern lands will not be easy, but it will open to you many secrets of nine worlds …
It should be noted that in Scandinavian mythology, the whole world consisted of nine main parts: Vanaheim united the world of bright spirits – Van; Alfheim – the world of benevolent spirits – alpha; Midgard is a world inhabited by mere mortals; Jotunheim – the abode of the giants hostile to the gods – the Yotuns; Muspellsheim – elements of fire; Svartalfageym – the world of dark alpha; Nieflheim – the underworld of dwarfs; Niflgel – the world of death. But the most significant was considered Asgard – the world of the gods – ases.
In the medieval works – “Younger Ed,” “The Ingling Saga”, “Prologue” and others – there is a mention that the aces led by Odin came from Asia or Ciscaucasia.
One did not immediately agree to go to the northern lands, because he loved his warm, familiar land. But Bohr still managed to convince his son.
– There the sky plays with colored lights. There even a mere mortal can hear the stars whispering at night. You will learn to understand their conversations and comprehend the language of the earth, water, sky, wind, animals, birds, fish and trees. There will be no peace for you in the country under the Polar Star, but a peaceful destiny is not your path. Go towards the secrets and your exploits! ..
Perhaps so, according to the legends, Bor was admonished by his son. Perhaps this is how the first Scandinavians perceived their land – a harsh land, mysterious and wise, thankful for every human effort.